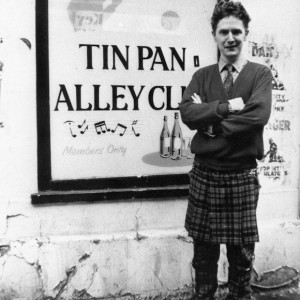 CONSERVATIONISTS have launched a campaign for the National Trust to take over the former West End home of The Sex Pistols after leading archaeologists claimed that cartoons by Johnny Rotten which are preserved there are just as important to heritage as cave man art.

The Save Tin Pan Alley campaigners are to ask the Trust to add an outbuilding at 6 Denmark Street to its property portfolio, which includes the childhood homes of Paul McCartney and John Lennon in Liverpool. The campaigners argue that the building, where the Sex Pistols lived, rehearsed and made demo recordings for their first album, which gave birth to the worldwide punk rock phenomenon, is just as important to the nation’s musical heritage as The Beatles’ homes.

Film-maker and music activist Henry Scott-Irvine, creator of the Save Tin Pan Alley campaign, is backing calls for some sort of monument to be erected in Denmark Street, where Bowie hung out with his friend Marc Bolan before he and the T Rex idol became stars. “Denmark Street was where David worked at Southern Music Publishing originally, I believe, in 1965,” said Mr Scott-Irvine  adding, “David had an American Second World War ambulance that he used to park in the street until the traffic wardens arrived at dawn. The popular story is that he slept in this and drove it to gigs. He did indeed hang out at the Gioconda Café there when he was in the band Lower Third and then known as Davie Jones.” http://www.londonweeklynews.co.uk/article.cfm…

‘Yet another blow to live music in the capital’
The 12 Bar Club closed on February 2nd 2016 following it’s switch from
Tin Pan Alley to Holloway Road, London 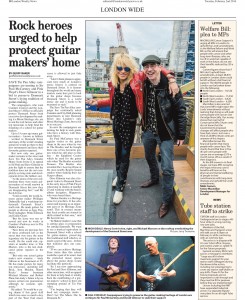 THE GUARDIAN
7th JANUARY
“The grubby end of Oxford Street is being tamed, but this isn’t regeneration, it is devastation”
by Peter Watts
THE GUARDIAN 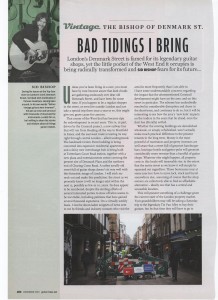 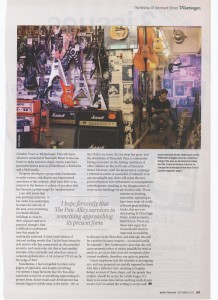 BRAVEWORLDS.COM
18th OCTOBER
‘Michael Monroe tries to save Denmark Street with his ‘Dead Hearts On Denmark Street’ song and video’

JOCKS & NERDS MAGAZINE
Summer issue 2015
An 8 page “Style: Denmark Street” feature on
Page 116 to Page 123 embracing the music and the campaign issues within the heritage site that is
Tin Pan Alley 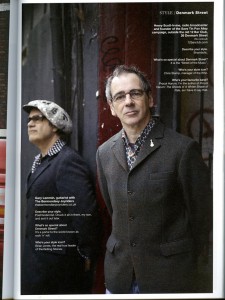 THE INDEPENDENT
23rd AUGUST
‘The Tragic Denmark Place Fire of 1980’
Six page feature by Simon Usborne
“Henry Scott-Irvine, the leader the Save Tin Pan Alley campaign, says that, where it is remembered, the fire is lumped in with anecdotes about the area’s insalubrious past to justify its gentrification. “It’s like the push to get rid of the gin houses of Hogarthian London, which these buildings replaced,” he says

“CAMPAIGNERS fighting to maintain the future of a famous music heritage street have warned that independent firms may not be able to afford to stay once a major redevelopment takes place.Denmark Street, known as “Tin Pan Alley”, was the heart-beat of British rock music culture in the 1970s and 1980s and is famed for its cluster of music shops and former recording studios that drew massive bands such as the Sex Pistols and Rolling Stones.

Camden Council has created a clause in the deal with the developer that it says will ensure many music businesses can get first dibs on new shops after the street is redeveloped to make way for the multi-billion pound Crossrail railway. But campaigner Henry Scott-Irvine said: “We want the rents frozen at the current rate and tied in to inflation only. We are concerned that the music businesses will be paying market rents and will not be able to afford to stay there.”

Denmark Street, Denmark Place and St Giles High Street is due to reopen in 2018 when the Crossrail works are finished.

A council spokesman said: “All existing tenants will be offered a minimum three-year lease on their premises at a market rent for music-related uses in the local area.” 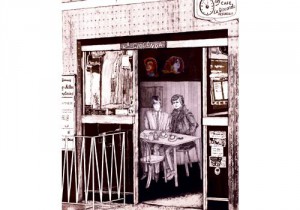 AN exhibition featuring some of the hidden gems of the West End are on display in Covent Garden.

Regeneration City Blues by Jane Palm Gold celebrates the social and creative richness of Soho and Fitzrovia and warns against the over-development of the areas.

Landmark social hubs for cult fans with shared music and fashion tastes like The Intrepid Fox pub, the Roxy Club and La Gioconda Cafe, are shown in a new light.

“I’m hoping people will come and enjoy looking back,” said Ms Palm Gold, who lives in New Compton Street. “It’s a history exhibition first and foremost. There are historical text panels, different shops. Denmark Street, north side – all the music publishers were there in the 1960s.” • Regeneration City Blues is open daily, from 10am to 6pm, at 55 Neal Street until August 31‘

MIP PRO
23rd JULY
‘An interview with the men behind “The Demise of Denmark Street”, A Documentary Feature Film.
Out soon’ by Daniel Gumble